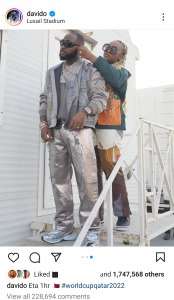 The afro pop singer returned to social media on Sunday, December 18 and shared adorable photos of himself and Chioma. This was the first social media post he had made since the death of his son, Ifeanyi in October 2022.

Following his return, millions of followers from across the world rushed to the post to like it.

The photos have garnered over 1.7m likes on Instagram and close to over 220,000 comments.

Yeni Kuti Reveals Only Reason She’ll Run From Her Marriage