•My Husband’s Death An Act Of God, Says Widow

Evelyn, wife of the late founder of Synagogue Church of All Nations (SCOAN), Prophet T.B. Joshua, on Wednesday said the death of her husband was an act of God. 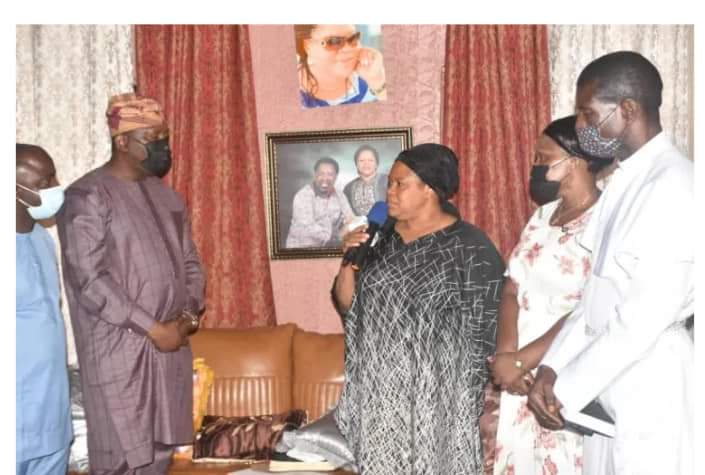 She spoke when a delegate from the Lagos State Governor, Mr Babajide Sanwo-Olu led by the Commissioner for Home Affairs, Prince Anofiu Elegushi paid her a condolence visit in Ikotun area of Lagos.

She added that the demise of her husband did not come to her as a surprise.

Evelyn thanked the Lagos State Government’s delegate for the visit.

“On behalf of myself and the entire synagogue family, we are grateful, (and) thankful for your presence here today (Wednesday).

“What happened is an act of God. There is time for everything. Like my husband do say. That is the word I knew from him very well. This is the job he was known for.

“This is what he was living for. That is what he was going to die for. So, it didn’t come to me as a surprise. I wasn’t surprise when it happened. As we all know, he was in service that day. So, that’s it,” she stated.

Joshua’s wife appealed to Sanwo-Olu to participate actively in her husband’s burial which would be made public very soon.

“I appreciate you all. I’m pleading, this is my message to the Governor. We need you; we need your presence,” she said.

Speaking, Elegushi said: “We are here on the directive of the Lagos State Governor, Mr. Babajide Olusola Sanwo-Olu to pay a condolence visit and offer prayers to the family of our beloved pastor and prophet T.B. Joshua.”

Also among the delegation include the Special Adviser to the Governor on Civic Engagement, Princess Aderemi Adebowale, the Presiding Chaplain, Chapel of Christ The Light, Venerable Ezekiel Oluwadare, Directors of the State’s Ministry of Home Affairs, among other State officials.

The delegation which presented a condolence letter signed by the Governor to the family of the deceased, prayed that God grant the family the fortitude to bear the loss.

Venerable Ezekiel Oluwadare, while praying for the deceased family during the visit, described “Prophet T. B. Joshua as a great man of God, who would be missed by all.”

Oluwadare also described the late prophet as “A philanthropist, the Jesus of the time, as well as a man loved by all and who abided by the Federal Government’s rules of Covid-19 during the lockdown.”

Twitter, Others Must Register In Nigeria As Nigerian Companies To Continue Operation – FG